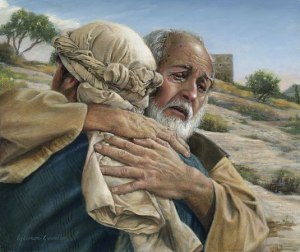 The format for this week’s story section will be discussing the new teachings contained in Luke, as well as a focus on the parables. We will conclude with Jesus’s greatest miracle, and its consequences, when He raises Lazarus from the dead.

Also, I will not be doing the question section this week, as I have ended each parable discussion with questions we can ask ourselves about our discipleship.

Focus:
– In order for faith to be increased we must embrace the cost of discipleship.

– We all get lost, it is a crucial part of life’s journey, and being found is the source of some of our greatest joys.

– Resurrection is necessary for our faith in Christ to have true trans-formative power.

Context and Timeline:
– Parable – a metaphor or simile drawn from nature or common life, arresting the hearer by its vividness or strangeness, and leaving the mind in sufficient doubt about its precise application to tease the mind into active thought.

– There are repeats in the Luke chapters on the cost of discipleship. It is imperative that we let those challenges sit in our mind when we are trying to become close to the Savior.

– A rabbi would have been expected to settle disputes.

– A steward was usually a slave that was entrusted with the management of the estate. If the master of the estate did not live at the estate it was common, and even expected, that the stewards make money for themselves and even multiply their wealth.

– When reading Luke chapter 15, read the three lost parables as a conversation the Savior is having with the Pharisees, in fact read it out loud.

– Riotous living is better translated as excessive living. This is important because instead of the lost son’s living being immoral because he was doing immoral things, it is more likely the Lord meant it was immoral for him to waste and live in excess. I think this tells us how important using our resources is when it comes to morality.

– Signs of Jesus Divinity – There are seven signs of John and last week we studied the 6th and this week the 7th:

– There is an interesting thing that is often overlooked about Mary, Martha, and Lazarus. Unlike most of Jesus’s disciples, they were not asked to leave their lives behind and follow Him. They were very influential in Jewish society and they serve as an important base camp for Jesus.

– Nations of the world is more accurately translated as Gentiles.

– When looking at a map, Bethany would have been east of Jerusalem, but west of Jericho on the road to Jericho. Bethany can also be translated as the House of the Poor and was a place where many sick, and poor people were gathered.

– Caiaphas is the son in law of Annas and was made High Priest after Annas was removed from the High Priest position in 18 AD. This was important as the significant business interest that came with the High Priest stayed in the Annas family. The fact that Caiaphas became involved in the conversations about Jesus indicates that the situation was getting serious in the mind’s of the Sanhedrin.

Story:
We will begin with 4 primary teachings contained in the Luke that build upon our focus of discipleship:

In addition to the direct teachings of Jesus, there are several parables that also teach us about our discipleship that I think would be good for us to dig into:

To finish up the story this week, we will jump into the brief narrative portion of the chapters. Jesus has been teaching on his journey to Jerusalem. In one of the villages he heals 10 lepers, but only one of the lepers declares gratitude for the healing. Not coincidentally, the only leper to declare gratitude was a Samaritan. Jesus continues on his journey, and as we have already recounted sets up camp in Bethany.

In John’s chapter we are told the story of Lazarus. While in Jerusalem, probably still in the winter, Jesus is informed that Lazarus is sick and may die. Jesus knows that Lazarus will die and so he continues to minister for a few days before returning to Bethany.

It was very dangerous for Jesus to return to Bethany, as the Jews who had recently tried to kill Him and were seeking His arrest, were also going to be at Lazarus home to pay respects to the influential family. Upon arrival Lazarus had been dead for four days. The tradition among the Jews was that the spirits of the dead remained near the body for three days after death, and this would mean that to everyone there Lazarus was truly dead.

When Martha sees the Savior, she is distraught, her faith has been tried to the breaking point, and yet she asks the Lord for help with whatever faith she has left. He lets her know that Lazarus will rise from the dead, to which she responds with her faith that Lazarus will rise again in the future and declares her faith that Jesus Christ is the Savior of all humankind, but she is likely not expecting anything to happen to Lazarus at this point in time.

Eventually Mary comes to Jesus on his journey to the tomb of Lazarus and declares regretfully that if Jesus would have been there Lazarus would have been healed. The Jews that are with Mary also complain that if He had been there, He might have healed Lazarus. Jesus weeps as He prepares himself to perform His greatest of miracles, but also because he loved Lazarus so much.

When Jesus arrives at the tomb, He demands that the stone be removed from the tomb. Martha is aghast and says that the tomb will stink since Lazarus has been dead for four days already. The Lord reminds her of the declaration she made of her faith and then prays to the Lord for confirmation of His actions. He thanks God audibly so the crowd will know that His power comes from God and then commands Lazarus to come out of the tomb.

It is impossible to imagine how being present for this miracle would have felt, but we know that this was the fulcrum of Jesus’s ministry. This is when those on the fence finally believed in Him, and when those who were seeking His demise found the nerve to finally put an end to His life.

Many of those most loyal to Caiaphas reported the truth of this miracle to him and Caiaphas quickly realized the impact this miracle would have. It would be impossible for many people to refute the Messianic nature of Christ. Jesus would obtain the power of the people and that would threaten Caiaphas’s place with the Romans. He justifies his plan to kill Jesus as a means of protecting the people from the Romans, who he believes will surely wipe the Jews out if Jesus takes control of the people.

From this point forward, the plan for Jesus’s murder was moving forward and so Jesus did not openly preach again until the final week of His ministry.

Key Moment or Scripture: Luke 17:5-10
5 The apostles said to the Lord, “Increase our faith!”
6 And the Lord said, “If you had faith like a grain of mustard seed, you could say to this mulberry tree, ‘Be uprooted and planted in the sea,’ and it would obey you.
7 “Will any one of you who has a servant[a] plowing or keeping sheep say to him when he has come in from the field, ‘Come at once and recline at table’?
8 Will he not rather say to him, ‘Prepare supper for me, and dress properly,[b] and serve me while I eat and drink, and afterward you will eat and drink’?
9 Does he thank the servant because he did what was commanded?
10 So you also, when you have done all that you were commanded, say, ‘We are unworthy servants;[c] we have only done what was our duty.’”

When I was a missionary, I remember my mission president teaching us about this section of scripture. As I wrote a few weeks ago about the need to keep going forward despite our unbelief I was thinking in the back of my mind about the upcoming opportunity to talk about increasing our faith.

The Lord is challenging the disciples at this point. He is basically saying that if we just do the things that are basically expected, the things that we are used to doing, that our faith cannot increase. Doing our duty, especially the things that come easy to us because of the environments we have built to protect us, are not going to increase our faith. We must be challenged, we must challenge ourselves, and more importantly, we cannot congratulate ourselves for doing what comes easy to us in the gospel. I think this scripture gives us a useful list of ideas that can help us to increase our faith.

1. Recognizing our weaknesses instead of congratulating our righteousness.
2. Bringing our weaknesses to the Lord instead of beating ourselves up that we have weaknesses.
3. Grace from Jesus Christ is sufficient for ALL people, not just some people
4. Let our weaknesses be open and then work on them and then ask God for help.
5. With time and patience our faith will grow, and our weakness will get stronger. The time is important because our expectations and the weird pressure we put on ourselves to be perfect can thwart this process.

Our faith can be increased, but it requires patience, humility, and openness that we aren’t perfect and that we all need help.

Final Thoughts:
Next week will be the final chapters we will discuss before the final week of Jesus Christ’s mortal life. I think it is important that we all think about our journey these first 4 months of the year and how we feel our relationship with Jesus Christ and His life have improved. I hope these posts are helpful to you as they have been so beneficial for me and my family.

Begin typing your search above and press return to search. Press Esc to cancel.